Recently named Transportation Director of the Year, Todd Watkins ensures that student safety is always at the forefront of decision-making at Montgomery County Public Schools. The school district maintains more than 1,400 buses which travel 1,200 routes. These school buses take more than 104,000 student riders to school and back every single school day.

Montgomery bus drivers were reporting so many violations that people didn’t believe how often incidents were occurring: “Everybody thought our numbers were very inflated, they thought we were making up numbers.” However, results from a camera-assisted pilot program convinced county legislators, the police, and other community members that the reports were correct and that the illegal passing of stopped school buses was a real safety concern.

Richard Hetherington, the former program director at Montgomery County Police Department, was shocked by the number of violations in the area, saying: “We only had 25 buses with cameras on them, and monthly we were seeing around 1,000 violations. That was alarming to me.”

He continued: “The number of violations that were actually occurring was staggering. And seeing the video of these near misses that never get reported, that could very easily have resulted in a fatality. It was terribly frightening.”

In response to this, the school district and police department decided to partner with BusPatrol to equip all local school buses with stop-arm enforcement technology to improve student safety.

The school district gradually implemented BusPatrol’s school bus arm enforcement solution over a period of three years. Now, every single bus in the fleet is equipped with interior and exterior school bus cameras.

The solution: A collaborative partnership

It’s a collaborative partnership, and BusPatrol is always open to suggestions from its partners. Todd explains: “BusPatrol has been really responsive in terms of us asking for product or process improvement along the way. We made it a true partnership where we work together to make a great enforcement product and supported by efficient processes.”

For example, Montgomery County Police Department noticed that the biggest rejection rate for citations was when a vehicle was too close to stop. To help manage this problem, the team suggested a yellow light indicator.

Richard said: “We collaboratively worked with BusPatrol to get a yellow light indicator. This means that my approvers can now see when the yellow lights come on, so they can see how much warning the drivers had to react and stop.

“This has made the decision-making process a lot easier and more accurate. It has been a dramatic improvement.”

BusPatrol takes on a lot of the extra work required with a stop-arm camera program including the initial review of violations, compiling evidence packages, mailing out citations, and more. As well as this, BusPatrol works with the police department to create court documents and schedule people for court.

Todd said: “The lion’s share of the work is done by BusPatrol. There’s very little effort required on the part of the school system. The police are responsible for reviewing the ticket process, because we want to make sure that every citation has been verified by a police department employee before it’s issued.”

School buses in Montgomery County are also equipped with internal cameras. This has helped the school to monitor student behavior. Whilst Todd believes that the students often forget that the cameras are there, it makes it easier to discipline students and respond to incidents.

He said: “It helps us to follow up when something does happen, and it helps us to know exactly what happened. As those stories spread throughout the school, that acts as a deterrent against bad behavior or encouragement for good behavior on the bus.”

According to the school district, bus drivers in the county are thrilled to have access to these school bus cameras, and not only to protect the children onboard. The camera footage has the additional benefit of ensuring that bus drivers are driving safely. According to Todd, drivers feel that the video footage is extra security in case they receive a complaint.

In addition, the police department has used the footage to teach school bus drivers about safe driving practices. He said: “We have developed a great relationship with the schools. We’ve used some of these videos as a teaching point. We have gone over and instructed at their driver in-service training and talked to them and shown videos of some things that we’ve seen, explaining why we don’t want them to do these things because it’s really creating more potential for risk.”

Has the program been effective?

Todd has witnessed a change in driver behavior since launching the program, saying “Our repeat offender rate is around 5%, which is very low. This makes me think that we’re going to run out of first-time offenders at some point.”

Do you want to take action against stop-arm violations in your school district?

Contact BusPatrol to find out how you can improve student safety!

As the Public Relations & Communications Officer, Kate supports the BusPatrol mission by raising awareness of school bus safety across North America. She is responsible for developing and executing PR campaigns, crafting content, organizing press conferences to announce new programs, and everything in between! When she’s not busy at BusPatrol’s Montreal office, Kate is likely reading or practicing yoga.
Share this article
Recommended for You 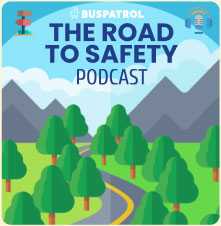